15 days of excavation have revealed aspects of a very complicated landscape. Clearly, we have only scratched the surface, But, four main areas of exploration have given a taster of what lies below the surface.

The lowest part of the site has demonstrated the survival of substantial remains lying north of an enigmatic, large, rectilinear enclosure revealed by LiDAR imagery. The relationship of these features to each other remains unclear.

Up the slope from here, a house platform was investigated. This revealed the footings of a well-built house with an internal drain. The house clearly post-dates the large enclosure as it cuts through the line of it. It also appears to have been more robustly built than the 19th-century Colony houses that were explored a few years ago.South of this house and within the enclosure, two earthworks were sectioned. One appears to be the upcast from a hollow-way (trackway) that seems to cut through the large enclosure. The other may be a sub-division of that large enclosure, itself subsequently cut through by the hollow-way. Further work is needed to confirm these relationships.

On the highest part of the site, next to the ‘turnpike’, a substantial mound was sectioned in order to determine whether it was a natural feature or archaeological. The excavations demonstrated that it was archaeological and comprised a number of individual features. These included: evidence for an earthen linear bank, a drystane dyke, a possible clay-walled structure and the mound itself, which appears to be largely artificial. Again, further work is needed in order to tease out any potential relationships between these features.

Grateful thanks are extended to Macdonald Hotels, owners of the Pittodrie Estate, for permission to carry out this exciting work on their land. 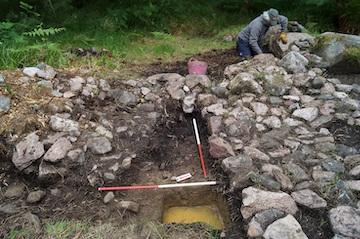 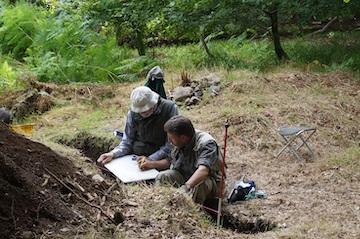