As guided walks to listen out for the seasons bird life have been cancelled the wildlife group's bird expert, John Michael Wills, has prepared this virtual guide to the sights and sounds of the thrushes around over winter.

We have six common members of the thrush family in the UK - Mistle and Song Thrush, Fieldfare, Redwing, Ring Ouzel and of course the common Blackbird. There are other very rare species which could occur. The first four are basically brown and spotty and at first glance may not easily be differentiated (we all know what a Blackbird looks like, hopefully even the females which aren't black!, and the Ring Ouzel looks somewhat similar). I won't cover the Ring Ouzel in this note as it's a summer visitor.

Mistle and Song Thrushes are quite similar looking and are with us all year, along with the Blackbird. They live in slightly different habitats: the Mistle Thrush in open woodland, often seen foraging in open fields before flying off with a distinctive dry rattling call (select on the link and turn your volume up), whereas the Song Thrush is more of a shy closed woodland bird. The Mistle Thrush is the larger bird and somewhat greyer brown in tone with large brown spots on a creamy breast - click on the link here and listen to its song (and see lots more information too), often heard immediately after a rain storm hence its traditional name in British folklore of 'stormcock'.

The slightly smaller Song Thrush is a richer brown on top with a neater denser distribution of small spots on a buffy/creamy chest and belly, and with a simple repetitive three- or four-note song. Interestingly, this thrush is not often seen up here in the NE in winter, preferring to migrate south to England to slightly warmer climes. We don't expect to see them again until springtime.

Now to our two winter visitors, Fieldfare and Redwing. Both migrate in large numbers over the North Sea to the UK from Scandinavia. Often seen in large, often mixed, flocks, either scoffing your Rowan berries and defending them vigorously against all comers, or bouncing energetically around open grassy fields looking for worms, etc. Both occasionally breed in Scotland, though usually in the remote far north.

The Fieldfare is the larger bird, about the same size as a Mistle Thrush, and somewhere between Mistle and Song Thrush in appearance, but look for the distinctly grey head and rump. They also have a very distinctive simple chattering song/call.

The Redwing is a very handsome neat-looking bird, dark brown above, with striated spots on the breast and belly, very distinct pale supercilium (stripe above the eye) and moustache, and a distinct red flush under the wing. It is a our smallest thrush. It's flight call is a high pitched 'seeip', often heard at night on migration.

Finally, there is the possibility of a very rare visitor, either stragglers from Siberia in the east or an American from the west, depending which way the prevailing winds have been blowing at the time. All have occurred at sometime in the UK, two of them even this winter but elsewhere in Scotland (Siberian Thrush and Eyebrowed Thrush, both from the east); and four of them have even turned up here in the NE in the past (three from the east: Black-throated Thrush, White's Thrush, and Eyebrowed Thrush, and American Robin from the Americas). If you want to see what they look like, some are quite handsome, even spectacular birds, have a look at the eBird web site https://ebird.org/explore and type in the respective name in the 'Explore Species' box. 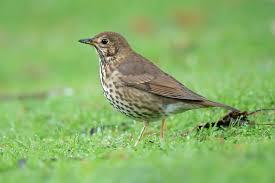