The guide below to swans and geese has been prepared by the Wildlife Group's bird expert John Wills:

We start with the swans. Very large white birds, what's not to like and how hard can that be? However, three species of white swan occur in the UK: the familiar and widespread resident Mute Swan; the Whooper Swan - a fairly common winter visitor, particularly here in the Don Valley; and a rare visitor, the Bewick's Swan. The first two are fairly easy to separate from each other if you look closely at their beaks, whereas the Bewick's looks very similar to a Whooper and has to be examined carefully. The chances of finding one are few, but you never know.

The familiar Mute Swan has a red bill with a prominent black knob at the head end, particularly on the males (known as a 'cob'; a female is a 'pen'). The males often have very pronounced raised wings over their backs. By winter time the cute fluffy cygnets have grown and changed to rather dirty greyish-brown juveniles with a dull beak colour. Though largely silent (hence 'mute') they do utter some sounds, with a hiss when angry or a warning croaky yelp - listen to the audio recording in the link. Also distinctive is the sound in flight, an almost musical throbbing sound. It is the UK's largest and heaviest bird, and their long laborious take-off from water is a sight to behold.

Mute Swans are common all over the UK, on lakes, lochs, rivers and on park ponds. They number about 23,000 in summer, increasing to about 50,000 in winter with juveniles and some immigrants from frozen northern Europe; there are 5000-8000 in Scotland. In our area, they are numerous on Loch of Skene (can number 100 or more) and further north at Loch of Strathbeg.

The slimmer Whooper Swan can appear slightly smaller but is in fact about the same size as a Mute and mixed in together would be hard to separate. It is distinguished by its elongate wedge-shaped yellow and black bill, about half and half of each. Make a careful note of this colour scheme because it is what separates it from a Bewick's - more on this later. Our winter visitors come primarily from Iceland where they breed so you won't see any cygnets. (Just a handful do breed in the far north of Scotland in some pretty remote areas of Caithness.) The juveniles are a more uniform grey compared to juvenile Mutes. A notable feature of Whoopers is their loud musical bugling calls, communicating to each other in flight and often while sitting on the water. Listen in to the recording in the link. In flight their wingbeats are quiet, nothing like the throb of the Mute.

About 16,000 visit the UK and Ireland each winter, primarily to Norfolk, N Ireland and Scotland. The total Scottish figure is about 1,600, with up to 1000 at Loch of Strathbeg and 150-200 in our immediate area of the Don Valley. The latter figure represents about 1% of the national total and is therefore of national conservation significance - hence the inclusion of the riverine habitat between Alford and Kemnay as a recognised conservation area within the next Aberdeenshire Local Development Plan. Quite large groups are often seen feeding and resting on local stubble and brassica fields between Monymusk and Kemnay, and at Whitehouse and Keig between Monymusk and Alford. They all probably roost on the River Don.

The Bewick's Swan is the smallest of the three with a shorter slimmer neck, though this would be hard to note in a swan flock. The easiest separation from the Whooper is the much reduced somewhat square-shaped extent of yellow on the beak. A small population come to the UK every winter from Arctic Russia, primarily to the Ouse Washes, Norfolk. The numbers have declined significantly since the mid-90s. It is a rare visitor to Scotland, particularly so here in the North-East where one or two are seen annually. They are probably passage birds on their way south to England. See this useful comparison identifying the main differences between the two species. (Note that the eBird link, if you care to search for 'Bewick's Swan', firstly shows the American version, the Tundra or Whistling Swan, with a reduced yellow patch and more black on the beak.)

The two most numerous goose species in Scotland are the Greylag and Pink-footed Goose, so-called 'grey geese'. Both species are winter visitors from their breeding grounds in Iceland, the latter species in very large, ever increasing numbers. Unfortunately, the Greylag picture has been complicated by the expanding resident feral breeding population spreading north from England such that here in the North-East it is not safe anymore to tell where our winter Greylags come from.

The Greylag is the largest and bulkiest of the grey geese. It has mottled and barred grey and white plumage and a prominent orange beak and pink legs. It has a loud nasal cackling call similar to that of the domestic goose: "ahnk-ang-ang", uttered on the ground or in flight. The name 'Greylag' comes from the old English 'Grey Lag' meaning grey goose; 'lag' derived from the call 'lag-lag-lag' used to drive or summon farmyard geese. Although not as numerous as Pink-feet, they can nevertheless be found in quite large groups on stubble fields, with up to several hundred within mixed flocks with Pink-feet.

Pink-feet are very similar in appearance though a bit smaller. The noticeable identifying differences are a smaller black beak with a pink band and somewhat darker head and neck. They arrive in Scotland in late September and can be seen in very large flocks, numbering often in the thousands, feeding on local stubble fields. They can be very mobile, moving noisily between fields, before transferring late in the day in c haracteristic V-shaped skeins, often after dark, to their waterbody roosts, before leaving again early the next morning back to the fields to feed. They can be seen in large numbers on Loch of Skene where their noisy early-morning departure is a spectacular wildlife event. Their call is a higher pitched 'ink-ink' compared to Greylags.

The monthly winter counts at the Loch of Skene tell an interesting story. When I first took over the counts in the late 90s it was a regular roost for Greylags with up to 10,000+ present, whereas Pink-feet would number only a few hundred at best. By 2000/2001 it started to change around and numbers of Pink-feet gradually increased as the Greylags decreased. Nowadays, it would be good day if a thousand Greylags were present whereas Pink-feet commonly number 10,000-15,000-25,000+ in October/November, and a maximum of 56,000 was recorded in November 2018. The numbers at Skene fluctuate, reflecting movements between roosts here in Scotland and England throughout the winter, and also freezing and snow conditions. As Skene numbers diminish so those at Montrose Basin seem to increase, with more than 80,000 counted there recently. From only about 30,000 in the 60s, the UK total now numbers about half a million as the Icelandic population has increased year on year. Meanwhile, the migrant Greylag population has remained roughly steady but a large proportion now 'short-stop' in Orkney as mild winter conditions favour them not travelling so far to avoid harsher winter conditions in Iceland; in fact several thousand now overwinter in Iceland with increased growing of arable crops in milder winter conditions.

There are in fact two more 'grey geese' species to be found here in the North-East, though both are scarce to rare in occurrence. The large White-fronted Goose comes in two forms: a Greenland version with a long predominantly orange beak, and a NE Europe-Siberia form with a pinkish beak. Both have a prominent white blaze surrounding the base of the beak and black bars on the belly. The main wintering areas for the Greenland race are on Islay in Scotland, with approximately 15,000 birds, and in SE Ireland, and Slimbridge, Glocs. for the European race.

The Bean Goose is far rarer and being very similar in appearance to the Pink-footed Goose is very difficult to identify in the field. It too comes in two subtly-different forms, though this time from northern Europe and NW Siberia. The difference is the shape and extent of orange-pink on the beak (good luck with that!). The main distinguishing feature from Pink-feet are the bright orange legs. One or two, at the very most a few, of both species may occur in the North-East, mixed in with the commoner grey geese so a very careful look-through any flocks will be necessary to find them.

Now we will have a look at the other goose species that also commonly occur up here, though not as numerous. These are the smaller black and white species of Canada Goose, Barnacle Goose, and Brent Goose.

The Canada Goose, common in parks down south, has spread north and now breeds in Scotland too. It is the world's commonest goose species with a total population of >6 million. It can vary in size (there are several forms or subspecies), has a long black neck and a prominent white chin. It was in fact an introduction from North America in the 17th century, which many people would like to see removed from our shores. Quite a large group can now be found on the Ythan Estuary and elsewhere the occasional few in with the Pink-feet flocks. The origin of the latter is speculative: they may be migrants.

The smaller Barnacle Goose is daintier, also with a black neck but a more extensive white patch all around the eye and forehead, small black beak and a paler belly. Often seen on passage flying in irregular flocks along our coasts in October-November to their wintering grounds at Caerlaverock on the Solway Firth and in Norfolk, occasional small groups can sometimes be found in amongst the Pink-feet flocks on fields or in the overnight roosts. These are from the Baltic, NW Arctic Russia and Svalbard. Large flocks of the Icelandic breeding population can be found on the west coast islands, the Outer Hebrides, as far south as Islay, and in Ireland.

There is an often-quoted myth that the name came from a medieval belief that the goose emerged fully-formed from the Goose Barnacle, because migration patterns of birds were not known at the time and birds just seemed to appear and disappear at certain times of the year, and that no chicks were ever seen. It is certainly an ancient name with similarities in Latin, French and Gaelic, and no other origin has been suggested to my knowledge.

Finally, the Brent Goose (or Brant in the Americas) is another small goose, with a predominantly all dark back, head and neck, with just a hint of a thin white neck patch (like a choker). There are two main forms occurring in the UK, a light-bellied population from E.Canada, Greenland and Svalbard, and a dark-bellied population from Arctic Russia. Either form may occur here in the North-East, though the light-bellied is the commoner. Usually observed migrating along our coasts in large untidy flocks and stopping only briefly on coastal estuaries and bays to feed on tidal mudflats and saltmarsh. A small group has been frequenting the Ythan Estuary for a while now. They are only rarely found inland. 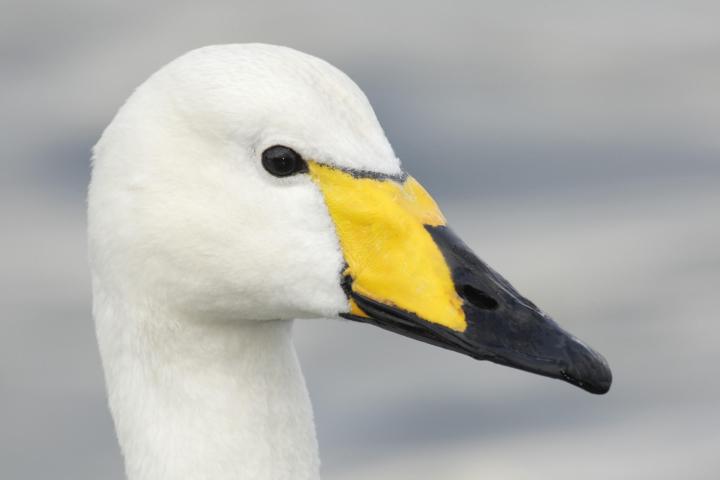