A moving and atmospheric service took place on Sunday at the memorial cairn near the peak of Oxen Craig on Bennachie. It was in memory of the three airmen who have died in crashes on Bennachie. The service was led by Rev Joshua Mikelson and traditional bagpipe music was provided by David Fraser of the Kintore Pipe Band. Around thirty people took part in the walk to the cairn from the Bennachie Centre to mark the 80th anniversary of the first plane crash. The Westland Wallace biplane smashed into the hillside during heavy fog on the 3rd September 1939, killing the two RAF airmen, who became the first casualties of the Second World War.

The service also remembered the second fatal crash on the hill: a Gloser Meteor Jet in February 1952 in which the pilot died. Three crosses, one for each airman, were laid on the cairn.. The memorial cairn was built in 2012 by the Bailies of Bennachie to honour the men who were killed in the crashes.

This year’s walk was organised by a trustee of the Bailies of Bennachie, Ann Baillie. She said:

“It was important to mark the 80th anniversary. As we reached the cairn a squall blew up and we were standing all in the rain. Many people told me afterwards though this made it very atmospheric and memorable. It also brought home how easy our lives are today compared to the generation which fought in the war. I would like to thank John Nicol of the Bennachie Centre Trust for leading the walk with me, the Rev Joshua Mikelson and David Fraser who played the pipes in very difficult weather conditions and the Garioch ranger, Alison Sutherland for her help.”

The weather cleared up as the walkers returned down the hill to hot drinks at the Bennachie Centre. They were able to view the exhibition on show at the Centre showing the stories of the crashes and efforts to establish the cairn. A selection of art work forms part of the exhibition donated by the family of the late former RAF pilot, David Wright. To date over 800 pounds has been raised for the RAF Benevolent Fund from the sale of the paintings. 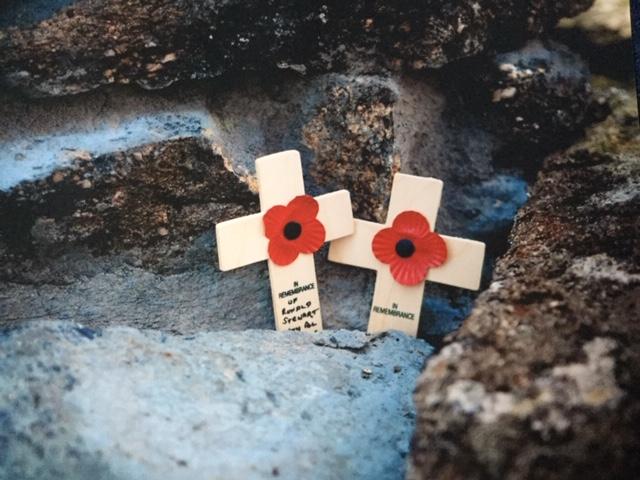