Note this stone is covered in the winter to protect it from the weather.

The Maiden Stone belongs to a slightly later period (around 700–800 AD) and has the symbols standing out in relief. It stands almost 3.5m (11 ft) high and has beautiful art work all over it. On the east side are four panels, the bottom having two figures, a mirror and a comb. The next panel has a representation of an “elephant”; above that a two legged rectangle and Z rod, and at the top four- legged beasts too faint to identify – some think the lower one is a centaur. The west side of the stone has sadly become very difficult to decipher due to the impact of weathering. The lower figure is a pattern of circles and Celtic knot work which is continued in what must have been a fantastically beautiful wicker –work pattern on the sides, this pattern probably being based on the extensive use of willow by early inhabitants in the construction of houses, boats, shields, baskets and so on. Above the circles stands a Celtic cross over 5 ft high, but the detail of the figures above the cross has disappeared.

A famous legend probably gave the stone its name. The legend of the lovely Maiden of Drumdurno, tells of a rejected suitor who met the Devil in Pittodrie Woods and in exchange for his soul bought his revenge. It was the eve of her wedding when the maiden was baking oatcakes, singing at her work, when she looked up and there was a handsome stranger who wagered her that he would build a causeway right up to Mither Tap before she had finished baking her firlot of meal. “It sets ye weel to bake lass, gin ye had ony mair speed at it”. Thinking this but idle banter, she lightly promised her hand and heart would be his reward if he won. At twilight, her firlot was nearly all baked, she looked up and saw a causeway finished right up to the hill top and the handsome stranger whom she now recognised as Satan himself, coming to claim his reward. Terror-struck she ran to Pittodrie Woods, but the Devil caught her and as she cried for help, she was turned to a pillar of stone, known to this day as the Maiden Stone. The Mirror and Comb carved on this Pictish sculptured stone were pointed out by the superstitious as the maidens girdle and baking board, and the crack near the top as the mark of Satan’s hand.

Close to Maiden Stone is the Statue of Persephone carved in 1961 by Shaun Crampton. 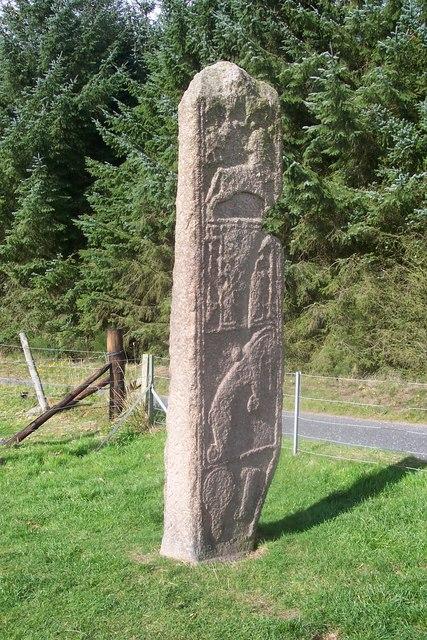