Excavations at Druminnor Castle continued for the eighth year in 2019. Druminnor was the original base of the powerful Lords of Forbes from where they governed their extensive estates in the North-east. Though ‘Castle Forbes’ in Keig has been the family seat since the early 19th century, Druminnor was the centre of operations from at least the 13th century through to the end of the 18th.

Following a Ground Penetrating Radar survey (sponsored by the Castle Studies Trust), undertaken before the start of the excavation season, three new areas of investigation were highlighted. These areas were opened along with work continuing in two of the previously opened trenches. The highlight of the 2019 excavation season was the discovery of a previously unknown well in the middle of the car park. Excavation of the well showed this to be stone-lined and had been in-filled when the tower was demolished in 1800.

The other two areas investigated revealed the remains of the outer garden enclosure at a depth of 1.5m below the present ground level. Excavation showed that the wall is at least 1 metre in width and survives to a height of over 1 metre in places. Further work in this area will help to answer more questions regarding this enclosure wall. Excavation of the second area revealed two layers of metalled and cobbled surfaces, which were separated by a substantial layer of soil. These may be related to a formal ‘Renaissance’ garden, common amongst grand houses of this period, though rarely recovered archaeologically.

Trench 2, which was due to be finalised in the 2019 season, contained a further surprise. A section of ditch, previously carbon-dated to AD 1425-1450 was shown to cut through older archaeological features in the very bottom corner of the trench. A subsequent carbon-14 date, kindly sponsored by Aberdeenshire Council earlier this year, returned a date of 1396-1444. This was from a piece of birch found at the base of a cut feature in Trench 11. The date matches the earlier one from the ditch discovered in Trench 2 and would appear to confirm that the two features are one and the same. This ditch probably relates to the documented 15th-century royal licence to fortify Druminnor and confirms the extent of the castle at that time.

Druminor Castle is a private residence and excavations are by kind permission of the owner. 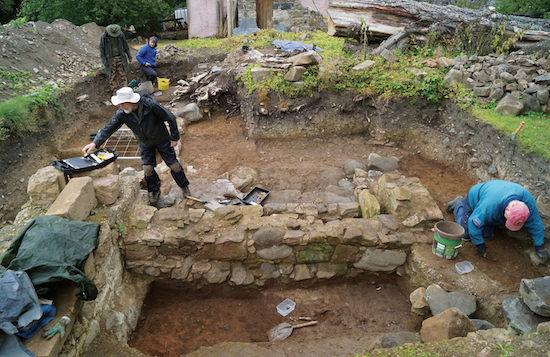