The lordship of forbes straddles the western end of the Bennachie/correen ridge and lies along the western boundary of the garioch. this landscape was unified under the forbes' control for at least 500 years from the 1200s to the end of the 1700s and provides a touchstone for landscape change across Bennachie and the garioch throughout this period. present work by the group is uncovering evidence for the development of this lordly centre from it construction, believed to be sometime in the 13th century, to its partial demolition at the start of the 19th century. a complimentary geological assessment of the area is beginning to unravel the pre-castle topography and develop and understanding of the rationale behind the siting of the castle. accompanying archival research is placing these geological assessments and archaeological excavations in their wider historical, social and ecological contexts.
Update by Colin Shepherd 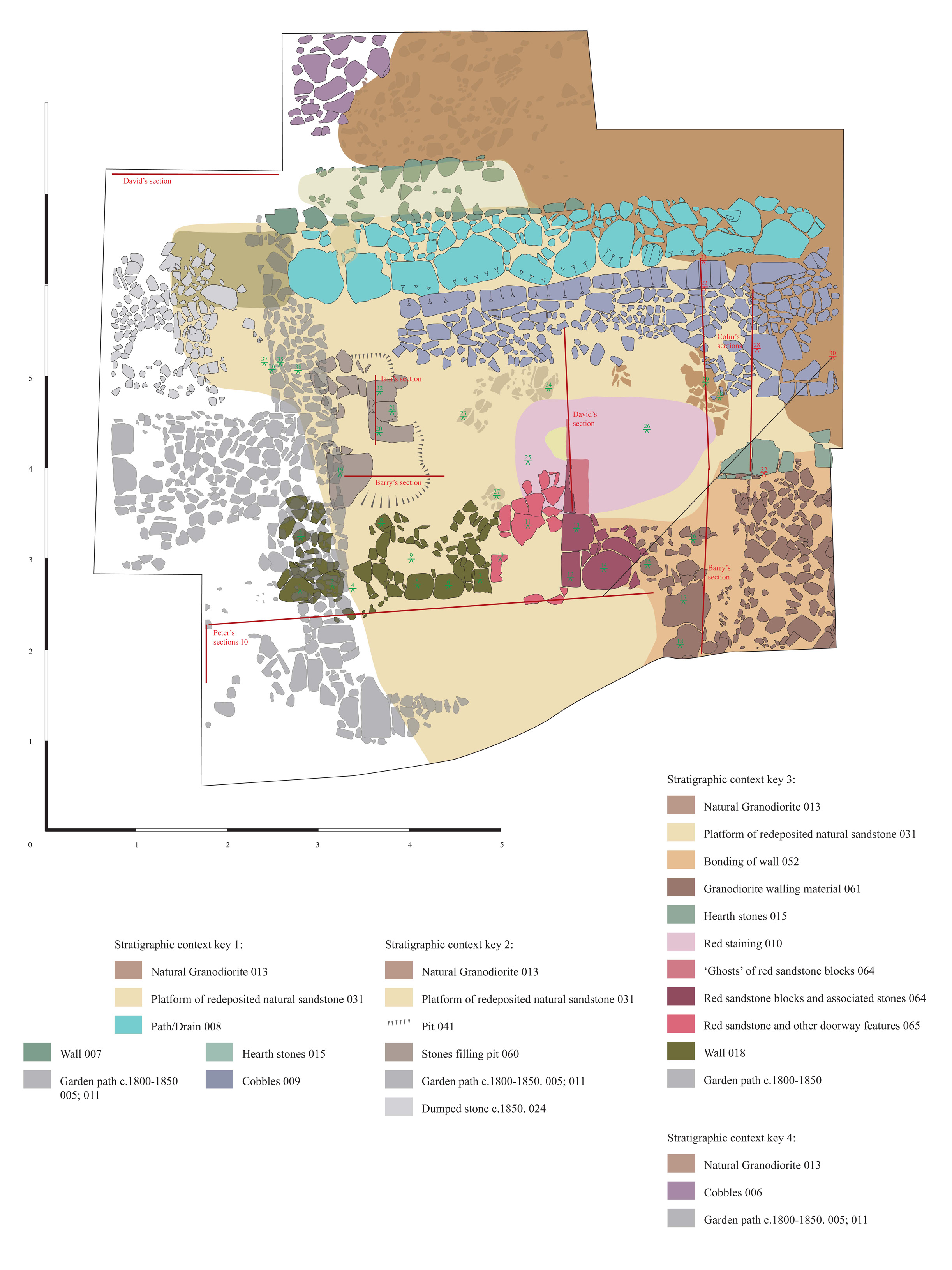 July saw an extremely successful two weeks of excavations at Colony sites Shepherd’s Lodge and Hillside, with more than 400 visitors, over 60 of who were school children on visits, and included help from over twenty-five volunteers and students. We opened seven different trenches over the two sites, and found many hundreds of artefact fragments, with several complete, though not intact artefacts at Hillside. The excavations have really confirmed how worthwhile the practice of archaeology can be when looking at sites of this period.
Though we have a relatively rich documentary record for this settlement, none of the sources we have were created by the colonists themselves, skewing the story the sources tell us. The group seem to either have been viewed as backwards, immoral and uneducated, or a last bastion of ‘the good old days’; salt of the earth-types who stood up to the landowners as a matter of principle. What both of these standpoints miss out is the individual human element of the story. What was life like for the actual individuals who made their lives on the slopes of Bennachie against difficult odds? Our work, though by no means finished yet, is already helping to find this out.
At Hillside, there is evidence for a possible pattern-book house, with an impressive hearth, and associated midden and outbuildings. Though this house is the largest and in many ways the most impressive of those in the Colony, this did not prevent the eviction of its last inhabitant. Indeed, the evidence suggests this was a rapid and possibly violent event, as many entire objects (such as a teapot, dairy bowls, soup plates, etc) were found under the walls. This leads us to believe that the walls of the house were pushed down very soon after the eviction, as not only were the owners unable to remove all of their belongings, but no-one else had time to remove them from the house, as would surely have happened if the house was left standing for any length of time. Prior to the excavation, there was no suggestion of an eviction event taking place at this site, so we have really added to the knowledge of the lives of the people who lived here. As well as the above mentioned artefacts, an ink-well was found, suggesting that someone who lived in this house was educated enough to be writing; letters, a diary or for some other purpose. Although the colonists were painted as uneducated, many of them attended local schools as children, and were obviously capable of writing.
At Shepherd’s Lodge, an accepted myth went that the eviction of the Littlejohn family involved a late-eighties man being carried out of his house on his bed, along with various crying children, and other family members, with the roof then set fire to, and the walls pushed in. This violent tale led to much criticism of the landowners, and was much-repeated as an example of the plight of the landless masses, pushed around at the whim of the landowners. Interestingly, the archaeology has shown that though the roof did burn down, it was not until a considerable amount of time had passed after the house ceased to be used as such. It appears that the building was used as a byre for some time before the roof burned, as the beaten earth floor, which would have covered the full interior of the house, was dug away over all but a small corner of the interior. It is likely this occurred as the building was ‘mucked out’ to remove dung and bedding. Hopefully here, we are using archaeology to help reach something less politically motivated than the accepted story of the eviction of the Littlejohn family. The impressive quality of the structure, the well-constructed roadway outside the house and the improvements made to the soil (details in Karen Milek’s report), go some way to show the high level of knowledge these people had about managing and improving the land they lived on, even before they had any landlords to tell them how it should be done.
With the fieldwork finished, the technical report is in the final stages of editing, and will be available to anyone who would like a copy. As this is a technical report, it will be a bit dry in places, but it will form the basis of the more accessible and discursive articles and papers that will hopefully follow on. As these are produced, I will of course let everyone know where they can be found.

The majority of the post-excavation work that has been done relates to the ceramic finds from the excavations. Members of the group have washed, catalogued and labelled all these items, and the task of undertaking full analysis will begin on the 17th of November, at the session in the Bennachie Centre everyone was emailed about. This work will allow us to show whether the two houses of the Colony were typical of rural houses in NE Scotland at the time, and what, if any, intra-Colony differences there were. This scope for teasing out the micro-history of the Colony is one of the most important aspects of the project. Detailed analysis may also help to show use-patterns within the houses, where the distribution of the artefacts allows.
It is hoped this workshop will expand the knowledge of the volunteers, many of whom have already undertaken an impressive amount of this work, to the stage where the analysis can be carried on without the need for specialist guidance. This work will continue over the rest of the winter and likely into spring too.

One of the main outcomes of this year’s phase of the project, as funded by the AHRC, will be an exhibition created by the Bennachie Landscapes Project group. This exhibition, alongside various events that are yet to be planned will take place from late February 2014 onwards. The dates and venues for these will be announced as they are booked.
To date, the exhibition group has decided that the main format of the exhibition will be six pop-up banners that can be set up in various venues, to allow for maximum flexibility. Each of these banners will focus on a different aspect of this year’s project, from the soil analysis undertaken at Burnside, to the excavations and archival research undertaken at Hillside and Shepherd’s Lodge.
Update by Leaf Gould

Local schools have also been busy over the last year, carrying out their own digs, field walking and researching local history archives. Their findings are available to view: