The weather definitely wasn’t promising as we drove across to Newburgh with some heavy showers en route. However, when we finally arrived in the beach carpark, it had dried up and stayed dry the whole morning. The wind, however, was not so pleasant, a strong south-easterly blowing up the estuary and very chilly.

We started at the beach carpark (NK002248), by the golf club, at 10.30am. We walked down the path to the old abandoned lifeboat station facing the estuary. At that time in the morning and inclement weather there was hardly anyone about and it stayed that way for most of the day.  There were only three seals on view on the haul-out area across the estuary mouth but a lot of oystercatchers and moulting eider. The tide was fully out with extensive areas of mud, sand and pebbles exposed offering plenty of feeding opportunities for the numerous waders and gulls. We walked up alongside the golf course to the shelter known as the ‘tin hut’ and returned to the carpark through the golf course. There were many waders, mainly oystercatchers and a few curlews, a few knot, a couple of feeding cormorants, and one bar-tailed godwit. At the tin hut a large flock of golden plover, probably > 400 strong, pitched down between the hut and Inch Point.

Next we drove through the village to Inch Road and up to Inch Point (NK004257) with a view further up the estuary to the Waulkmill road bridge. Here there were many redshank, more curlew and godwits, and a few dunlin. Returning back along the road out, there were two little egrets on the Forvie Burn. These are regular visitors on the estuary these days.

We continued on over the bridge to the first layby (NK006283) where I happened to glimpse something interesting down on the shoreline. Juggling the car through the narrow guard posts, we got a great view of a Great White Egret (and another Little Egret, making three altogether on the estuary).  The GWE has been on the estuary since 22 September and observant watchers had managed to read the colour combination of the rings it bore - turns out this bird was ringed in Grand-Lieu Lake, Loire-Atlantique in France. GWE is usually a rare bird up here although breeding down in Somerset; however there have been two, maybe three knocking around between the Ythan and Loch of Strathbeg, and on the R Dee, this year.

We continued to the next larger carpark overlooking the higher reaches of the estuary. Here in the muddy bay before us there were many more redshank, a large number of lapwings. We stopped for lunch in the Waulkmill hide which at least got us out of the wind, where we added a few greylag geese, a skein of overflying pink-footed geese, plus single mute swan, and buzzard and kestrel in thew distance. We didn’t manage to see the peregrine that another birdwatcher had seen overflying the distant trees. We finished off with quick visits to the upper reaches of the estuary down the ‘fishermans’ track and to the Logie Buchan bridge. A party of feeding little grebes in mid-river and a single greenshank at the first site completed our total for the day. We finished at 2pm, just in time before a series of squalls set in the for the afternoon.

Altogether I recorded 37 species plus the hybrid crow, today, including:

Not a bad return considering the weather. Of the usual birds on the estuary we missed only ringed plover and shelduck. Better weather would have added a few hedgerow birds. 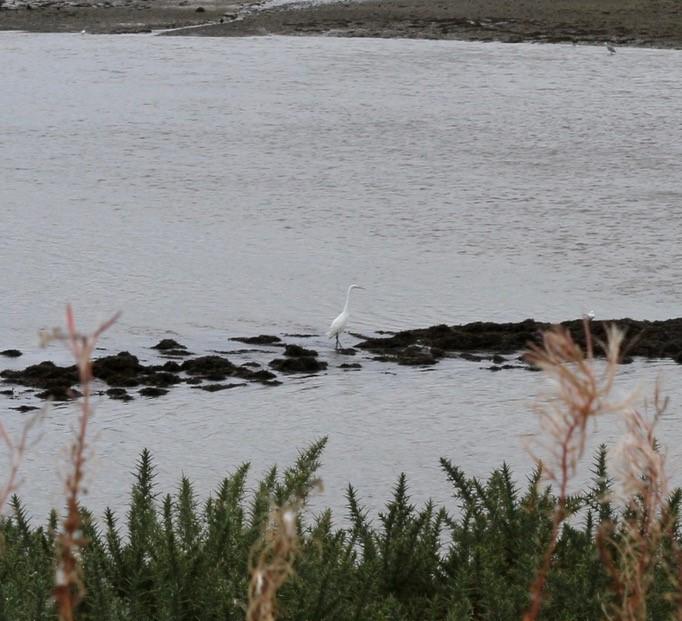