What is your image of an archaeologist?

Indiana Jones? Of have the Time Team given it a modern twist? Ever wondered what it would be like to find hidden treasures and evidence of past lives buried in the earth around us.

Allan Will did – and for Scottish Archeology Month he shares his experiences of a first time trying his hand at archeology. He has written a blog and put together a video of his experiences.

And you can read or watch them in our video below.

Archaeology Can Be For Anyone

Since before I could spell it, I wanted to be an Archaeologist.

However, life takes a myriad of twists and turns and my career took a different path.

I have always wondered what lies beneath all the lumps and bumps of our countryside and what story they could tell of how life was like for our ancestors. In early 2018 I noticed an article in the Press and Journal calling for volunteers to help with the excavation of a site on the slopes of Bennachie on which it was believed was the location of a Bede House.

I had heard of the Bede House before and had seen its rough location marked on the Ordnance Survey map. At the time I lived nearby and had walked my dog around that area often wondering where the site may have been located.

Needless to say, my interest had been piqued. Now came the hard part, having the confidence to get in touch and put myself in a situation that I had no experience in.

I went for it… I got in touch with the lead Archaeologist Iain Ralston and booked myself in for 3 days over the summer… I was in, no going back now.

Over the next few weeks, I armed myself with a trowel and some kneepads, and crammed a few episodes of Time Team, -- I was ready for action.

I arrived early on my first day and was warmly welcomed. I immediately felt at ease. A day on the site starts around 10 and finishes about 5. This is punctuated by the whistle indicating welcome tea breaks.

I was immediately put to work;. I spent the day scraping away, learning about layers and contexts. I was given the task of exposing a possible doorway, which was incredibly exciting as I exposed a door jamb and a drilled horizontal hole that could have been used for a door hinge.

On my last day Iain asked if I would like to draw a section of a trench. I was happy to give it a go.

I was given a sheet, a scale to work to and an explanation of how to go about it. For me this was a responsibility I was not expecting after only 3 days. I had begun to understand that Archaeology is so much more than digging trenches.

I think it must have taken me an hour to draw my first stone in a 3-metre wall -- I was so keen to get it drawn in the right place and to the correct scale. After stone one it began to flow a bit better. Three hours later I was done. I was well chuffed. I asked Iain how long he would have taken to draw the same section -- “Half an hour or so” was his reply. Oh well, got to start somewhere!

One of the most enjoyable things I found about a day on site is the absolute escape from your daily life. When your head is down, eyes peeled on every scrape of the trowel, time seems to fly past.

The following year the opportunity arose to return to Bennachie to an area below the Bede House site. A LIDAR survey had shown an interesting enclosure with possible buildings within that needed investigating.

On my first day I arrived with a little bit more confidence than I had the previous year. I needed it! Iain handed me some string and pegs and asked me to stake out a 4m x 1m trench over a house platform and excavate it!

Thrilled by the responsibility I had been given I jumped at the chance. Now, digging a trench is not always as it looks on TV. Here there are not the pristine lawns of a stately home with lovely soft soil. Instead we have nettles, roots, bracken, more roots and of course midges!

Over the next few days, I excavated my trench.

I uncovered a part-cobbled floor.

Found an area with lots of clay deposits.

And the highlight of my trench -- a beautiful amber bead!

To this point I had found bits of pot, slate and glass which are all exciting to find, but the bead was a personal thing that someone would have been sad to lose at some point in history and seeing it pop out is something I won’t forget.

In late 2019 an event was held to launch the publication of ‘Bennachie Landscapes Series: 4’. I was looking forward to a series of talks on the History and Ecology of Bennachie.

When I arrived, I bought my copy of the book, I had a quick flick through the pages and was immediately drawn to Page 110….and wow!! I recognised Figure 4. Sections 18 and 19. It was my 4-hour drawing published in all its glory!

I have only completed 7 days on an Archaeological Dig but in that time i I have learned so much.

The preparation and survey work that goes into a site before the first trench is dug.

All the research that is done to bring context to the practical work.

The collaboration of ideas from the entire team.

Seeing at first hand the vision an Archaeologist has, in order to be able to use the information at hand to know where on a site to dig a trench.

Understanding that Archaeology is so much more than just the trowel, I now appreciate the hours spent drawing, photographing and recording all that has been discovered.

I have now read the full report on the site of the Bede House. The extent of information collated and interpreted is truly astounding.

When I walk my dog past that area now the site has a whole new meaning. You can close your eyes and gaze into the past and wonder what life was like for the people who lived their lives on Bennachie.

And you too could be part of it! Why not give it a go! 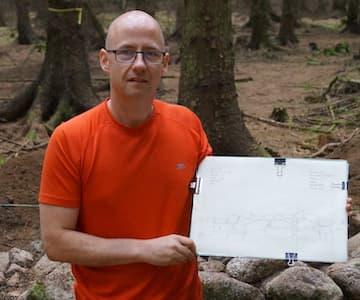