February 12th marks the anniversary of the second of two aircraft crashes on the slopes of Bennachie. On February 12th 1952 a Gloster Meteor single-seat turbo-jet fighter crashed west of Oxen Craig. The pilot and sole occupant of the aircraft, 22 year old Pilot Officer John Brian Lightfoot RAF of Racecourse Lane, Northallerton, was killed instantly. (pictured on the right of the photograph) Brian was the only child of Thomas Monty Lightfoot and Juanita Blakey. Brian was born on 8th December 1929. He was educated locally then boarded at Barnard Castle School 1942-48 and in his final year was captain of the swimming team and Company Sergeant Major in the newly formed Combined Cadet Force.

The Meteor was a F Mark 8, Serial No. WA882, of No. 222 Squadron. The squadron, flying the Spitfire, had been a fighter squadron throughout WW2 and had taken part in the Dunkirk evacuations, the Battle of Britain and the invasion of North West Europe. It was one of the first jet fighter squadrons in the RAF, taking delivery of the Meteor in 1945.

PO Lightfoot had departed from RAF Leuchars at 09.58 and was involved in a low flying and cross-country exercise. Weather conditions and visibility were poor. As reported in the Evening Express the day of the crash and the Dundee Courrier on 13th, Mrs Lottie Marr of Westhaugh heard an explosion and saw smoke rising from the hill. She later drew an arrow in the snow to point rescue parties in the direction of the crash, initially reported to have involved a Vampire jet.

The newspapers also reported that Mrs Rennie of Mill of Tillyfour had seen the aircraft overhead at 10.20 in ‘blinding snow conditions’. Mr Williamson of Glenton. Monumusk, is also reported as having witnessed the aircraft bursting into flames on contact with the ground. His account mentions having seen ‘something drop from the machine’ before it flew on briefly before the impact but there is no mention of that in any other account of the crash, including in RAF records. He telephoned the Forestry Commission and was immediately put in touch with the Police. Other eye witnesses included the barman at the Premnay Hotel and a school cleaner at Keig School, who reported sighting the aircraft heading for higher ground on Bennachie from the direction of Premnay in thick snow. Also involved were Tillyfour Estate workers John Smith, George Clark and Alan Rennie, who reported the incident to proprietor Mrs Homer-Millard, who notified the Police

An RAF mountain Rescue team from RAF Edzell was on the scene by midday and was aided by an aircraft, named as a Bristol Blenheim or an Avro Anson from RAF Edzell in difference sources, although restricted visibility meant that assistance was limited. Attempts to move rescue equipment to the crash scene from Glenton Farm were hampered by deep snow. The Evening Express states that their reporter ’in a radio car receiving from the Aberdeen office’ guided the team to the crash scene. Brian’s body was recovered from the crash scene after a four hour search by a team from 44 Maintenance Unit, RAF Edzell, and personnel from RAF Dyce, with the use of a makeshift sledge constructed from pieces of the fuselage of the aircraft wreckage. Due to the location of the crash site, the wreckage, which was scattered over a wide area at Watcheraig Seat, was not removed but was later buried where it was found.

Brian was buried with full military honours in a Commonwealth War Graves Commission grave at Leuchars Cemetery after a service at RAF Leuchars on Saturday 16th February 1952. The service was conducted by station padre Squadron Leader Pratt and the burial party led by Group Captain J Brown. Information on the funeral service appeared in the Yorkshire Post and Leeds Mercury on 15th September and a brief account appeared in the St Andrews Citizen on 23rd February.

The Meteor had a very poor safety record, with 436 fatal crashes during its years of service. Six years before Brian’s crash, the Commanding Officer of 222 Squadron, Sqn Ldr Eric Ball, was killed when his Meteor failed to recover from a dive during aerobatics. Eric had been a Flight Commander with 242 Squadron under Sqn Ldr Douglas Bader during the Battle of Britain. Bailie James Mackay recorded in a 2012 article in the Leopard Magazine that 50 Meteor pilots were lost in the early 1950s alone, ‘when their aircraft dived inexplicably into the ground’ and that in 1952 ‘a Meteor was written off every two days on average and a Meteor pilot was killed every four days.’ RAF figures for aircraft lost in 1952, covering 36 types, indicate that of the total of 505, almost 30% were Meteors. The official cause of Brian’s crash was however put down to “poor definition of snow covered mountains in the prevailing conditions”. One of the 20 mm cannons from Meteor WA882 still hangs from the ceiling of the Bennachie Visitor Centre. Writing on the History Press web site at https://www.thehistorypress.co.uk/articles/bennachie-s-casualties-of-war/ it is reported by Duncan Harley that the cannon had been retrieved by souvenir hunters and stored in a barn at Oyne before being re-discovered in the 1980’s.

A memorial service for the pilot of Meteor WA882 was held, with some of his relatives in attendance, on 1 September 2009. Some 80 people attended a ceremony in September 2012, when the memorial cairn was unveiled commemorating Brian and also Canadian Flt Lt Ellard Alexander Cummings and Leading Aircraftman Alexander Ronald Renfrew Stewart from Paisey who died in the earlier crash on 3rd September 1939. Brian’s cousin Julie Blakey is understood to have been present at the unveiling of the memorial cairn. Bailies and friends also walked to the crash site in 2019 to observe a brief ceremony at the memorial.

As always, it should be stressed that anyone coming across wreckage from the Bennachie crash site, and all other sites, is asked not to disturb or remove items as a mark of respect for those who lost their lives. 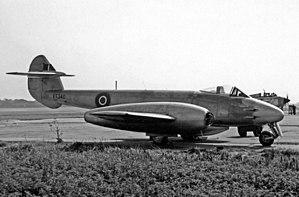 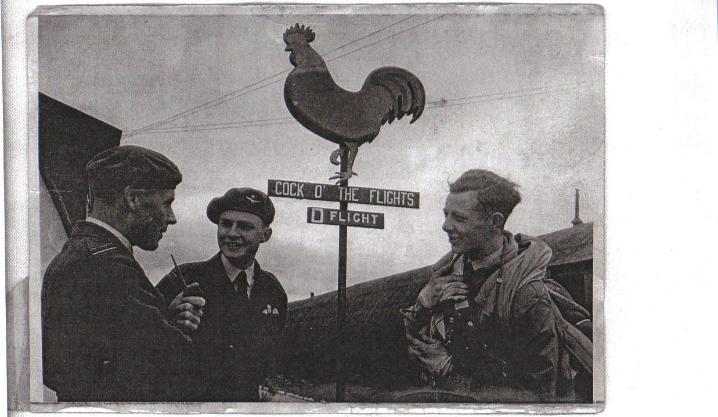